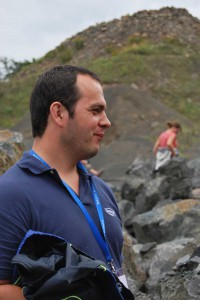 The 2015 EMU Research Excellence Medal has been awarded to István Kovács, Geochemical and Laboratory Department, Geological and Geophysical Institute of Hungary, in recognition of his outstanding contributions to the application of infrared spectrometry to major issues in Geology and Geophysics. Dr. Kovacs developed an original method for determining water content of nominally anhydrous minerals applicable to fine-grained polycrystalline material and using unpolarised IR radiation. He then collaborated with experimental petrologists to develop a new layered sample design which allowed IR spectroscopy of monomineralic layers sandwiching a model mantle composition. This study provided an explanation for the rheological contrast across the lithosphere/astenosphere boundary which characterises the thin plate behaviour on the Earth (Plate tectonics). Dr. Kovacs has several active collaborations with leading scholars both in Europe and overseas. He plays an active role in synergistic activities including the organization of conferences, reviewing articles, acting as a session convener, and advising several students.