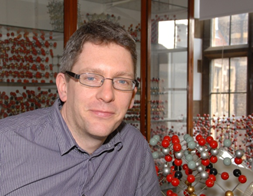 The 2012 EMU Research Excellence Medal has been awarded to Richard J. Harrison, Department of Earth Sciences, University of Cambridge, UK, in recognition for his significant contributions to understanding chemical and magnetic microstructures in minerals, and their relationships with cation ordering and phase transitions. His approach has ranged from experimental to theoretical to analytical and involves minerals important to geophysics as well as to the material sciences. Harrison’s research demonstrates how phenomena at the nanoscale can affect macroscopic properties of minerals and rocks. In addition, he tackled serious challenges in the small-scale understanding of paleomagnetic signals by using an innovative combination of experimental and computational techniques. During his career, Richard Harrison has had active collaborations with numerous researchers around the world, particular in several European countries including Germany and Norway, and thus has helped to strengthen collaboration within the geosciences community. Last but not least, he proposed  and coordinated an international exercise to identify the 100 more important questions to be addressed by mineral sciences in the next 10-20 years.

The award ceremony and the 2012 EMU Medallist’s talk will receive a special slot in the program of the 2013 Goldschmidt Conference (Florence, 25-30 August).