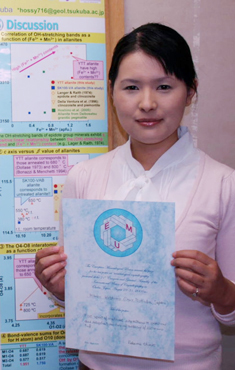 During the 21st General Assembly and Congress of the International Union of Crystallography (Osaka, Japan, August 23-31, 2008), the EMU Poster Prize was awarded to Mihoko Hoshino from the Department of Earth Evolution Sciences of the University of Tsukuba (Japan). Mihoko showed her passion for mineralogy and her expertise while defending a well-prepared and well-presented work entitled:

“First Report on Natural Oxyallanite: Oxidation and Dehydration During Welding of Volcanic Tuff”.

In this study, she combined the results of EMP analysis, structure refinement, FTIR spectroscopy, and bond-valence calculations to detect and constrain different amounts of dehydrogenation in allanite.

Congratulation to this impressing researcher !