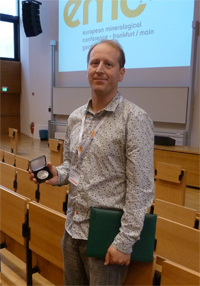 Sébastien Merkel was born in 1974 in Ambilly, France. He studied at Ecole normale supérieure de Lyon and, after a pre-doctoral research fellowship at the Geophysical Laboratory, Carnegie Institution of Washington, DC, obtained a PhD at the Ecole normale supérieure de Lyon (1999-2002). After a JSPS post-doctoral period at University of Tokyo (2002-2004) and a Miller Research Fellowship at Department of Earth and Space Science, University of California at Berkeley (2004-06), he was appointed a CNRS research associate at Lille University, France (2006-10), where he was hired as a professor in 2010.

Sébastien Merkel is a leader in the study of the strength, rheology, and texture of materials at very high pressures.

He began by doing theoretical calculations of the performance of diamond anvils, work that lead to breakthroughs in the understanding of the very large deformations that diamond can experience in multimegabar static compression experiments.

He then moved on to experiments where his theoretical and computational skills were matched by exceptional talents in the laboratory. At that time, the diamond-anvil-cell radial diffraction technique was just being developed and extended to measure elasticity, strength, and texture measurements. Merkel carried out some of the first measurements and further extended the technique with elegant new approaches such as testing novel gasketing methods. He also helped to extend the method to high P-T regimes, work he continued at Berkeley and Tokyo.

Sébastien Merkel continued to develop the theory behind these measurements. Notably, he was able to separate the effects of elasticity and plasticity in the existing approaches in order to more properly invert data to obtain the single-crystal elastic moduli as a function of pressure, as shown in his paper on Co in 2009. As attested by over 30 publications in famous journals, his research in this broad field, which is essential for both solid Earth science and materials science, continues to have impact – with applications as diverse as lower-mantle and inner-core mineralogy or the time-clustering of large earthquakes.

Merkel’s excellence is well known to the mineral physics community since he is more than willing to share his skills with his peers, thus supporting numerous work groups in acquiring the necessary skills for the new technique. Furthermore he maintains a webpage where he makes numerous tools and tutorials available to the community. The link to this site is now a standard tool for mineral physicists all over the world.

In summary, Sébastien Merkel is a generous and remarkably talented young scientist. He is not only the leading scientist in his generation in strength, rheology, and texture studies of materials at very high pressures, but he is one of the premier scientists of any age in this field by virtue of his contributions in both theory and experiment.

He is a worthy recipient of the EMU medal for research excellence, thereby signalling that unselfishness and excellence may go well together in science.