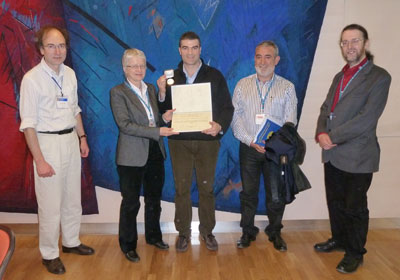 Medalist lecture title: “A new approach to the study of mineral inclusions in diamond”

Fabrizio Nestola started his scientific career as a PhD student with Dr. Mario Tribaudino in Torino, Italy. He was awarded a post-doctoral position at the Bayerisches Geoinstitut, during which time he successfully obtained a Humboldt Research Fellowship. Even more impressive was the fact that he subsequently obtained a full extension of the fellowship from the Humboldt foundation that, these days, is very rarely awarded. Nonetheless, Dr. Nestola decided to resign his fellowship early and join the Virginia Tech Crystallography Laboratory in November 2005, in order to broaden his research experience. This post-doc had to be terminated after only four months because he was called back to Italy to take up a faculty position at the University of Padua.

From the beginning he was interested in the determination of structure property relationships of several major mineral groups as feldspars and pyroxenes at both high pressures and high temperatures in order to solve fundamental geological and mineralogical problems. He has used the knowledge base that he has developed to probe the transitions in pyroxenes from a more fundamental, quantum-mechanical viewpoint. This reflects some of his earlier research in which he applied his experimental insights in to the behaviour of framework minerals to the interpretation of quantum-mechanical calculations of bonding. This is clearly the way forward for the field of mineral physics, and Dr. Nestola has clearly placed himself to exploit this approach as one of the leaders of the field.

Dr. Nestola has also contributed significantly to the detailed characterization of the materials that form the Earth’s deep interior. In particular, he contributed to the understanding of the mechanism of incorporation of water into nominally anhydrous minerals. Here again, he has combined a series of detailed measurements of the crystal structure and compressibilities of hydrated and nonhydrated spinels to show that the effect of hydration on the bulk moduli of silicate spinels is not a direct one, but that the softening observed is a consequence of the introduction of cation vacancies associated with hydration. That result will lead to the great simplification in modeling the seismic consequences of hydration because the moduli will scale simply with density, rather than directly with amount of hydration. He has discovered softening in antigorite that may play a critical role in slab subduction processes, and his characterisation of dmisteinbergite in a pseudotachylyte opens up a fundamentally new avenue towards the goal of estimating energy release during faulting. In addition to his research productivity of 69 papers in international journals, and his scientific insights, the other characteristic that makes Dr. Nestola stand out from his peers is his unbounded enthusiasm for cooperation with scientists at all levels. You will see from his publication list that he has built up a dense network of collaborations with colleagues not only in Italy (e.g. Pavia, Palermo, Milano and Torino), but also across Europe (Germany, UK, Sweden, Denmark, Austria, Bulgaria) as well as with research groups in the United States (e.g. Virginia Tech, Colorado, Hawaii etc). Dr. Nestola’s dedication to both international collaboration and the teaching of students is most recently attested by his organizing and convening the first international school to be sponsored by the Italian Gruppo Nazionale di Mineralogia, and held on February 11-15th 2008 in Brixen, Italy. Dr. Nestola had the vision to see the need for a school on High-pressure, High-temperature Mineral Physics, and was the person to first propose that the school be made fully international, with both faculty and students from outside of Italy. In summary, Dr. Nestola’s breadth of experience combined with scientific rigor means that he has already become a leader of international stature in the field of crystallography and mineralogy. His enthusiasm and success in building networks for scientific cooperation and teaching across Europe makes Dr. Nestola a gifted recipient of the EMU Medal for Research Excellence.