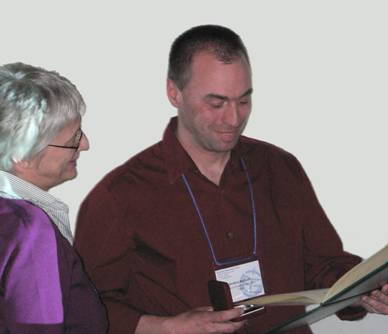 The EMU medallist committee has awarded the 2008 silver medal to Anders Meibom.

Born in 1969, he obtained the Ph.D. in Physics at the University of Odense in August 1997 and then got a postdoctoral position at the Institute for Geophysics and Planetology at the University of Hawaii. Since 2005, he is a member of the team at the Laboratoire de Minéralogie et Cosmochimie at the Museum National d’Histoire Naturelle in Paris.

His main interest focuses on cosmochemistry. He is involved in a number of international projects and networks aiming at investigating the anatomy of primitive solar system materials including the early isotopic fingerprints. Anders takes part in interdisciplinary research activities merging biology, geochemistry, and mineralogy related to biomineralization and past climate change. His scientific contributions include:

Expeditions to recover meteorites took him around the world, from Greenland to Antarctica. Remarkable results are related to the understanding of extraterrestrial materials and the early Earth. A further scientific interest is modelling thermodynamic and kinetic processes. This broad field of interest has resulted in about 70 papers published in international peer-review journals and in more than 100 abstracts from national and international meetings and conferences.

Anders Meibom is an excellent lecturer and a very enthusiastic and generous collaborator. He is regularly invited to give talks at international meetings and universities world-wide, is currently an Associate Editor of the Geochimica et Cosmochimica Acta and is serving on the Committee of the Meteoritical Society. For the relevance and international dimension of his work, Anders Meibom is a highly deserving recipient of the EMU Excellence Research Medal for 2008. The medallist talk ‘NanoSIMS on Carbonates: From the Solar Nebula to the Modern Coral Reef’ was given during the 2009 EGU Meeting, where EMU’s President Roberta Oberti awarded the EMU Research Excellence Medal to Anders Meibom.