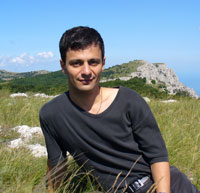 The EMU medallist committee has awarded the 2007 medal to Artem R. Oganov. He was born in Moscow, Russia, in 1975. After obtaining an MSc in crystallography at Moscow State University he obtained a British Government PhD scholarship and continued his studies at the University College London, UK. Since 2003 he is employed as a Senior Research Scientist and Lecturer at the Laboratory of Crystallography, Department of Materials (ETH Zurich, Switzerland) and since 2006 he holds an additional position as Adjunct Professor at Moscow State University. The principal aim of his research is related to mineralogical aspects of crystallography. Most of his publications are related to studies of mineral transformations under non-ambient conditions. Remarkable results are related to geophysics and represent significant contributions towards the understanding of the composition and structure of the Earth’s deep interior.

Artem R. Oganov is a prominent leader in the field of prediction of crystal structures based on ab-initio calculations. One important result of his research is that – under very high pressure – CaCO3 unexpectedly forms pyroxene-like chains consisting of tetrahedrally coordinated carbon atoms. He predicted a number of new crystal structures for MgSiO3 intermediate between perovskite and post-perovskite and demonstrated that these compounds may become stable in the Earth’s mantle. The behaviour of these compounds with particular emphasis on their plastic deformation has significant implications for the interpretation of mantle anisotropy in terms of plastic flow. He was directly involved in the discovery of the MgSiO3 post-perovskite phase and continuous to study its structure, physical and rheologic properties. This phase is believed to constitute the principal mineral phase present in the core-mantle boundary (D”) layer: its structure is characterized by layers formed by octahedrally coordinated Si atoms intercalated by Mg-cations. The properties predicted by Artem Oganov’s ab initio calculations allow explanation of some of the geophysical anomalies observed for the D” layer. He was the first researcher using ab initio molecular dynamics to determine the elastic properties of materials thereby providing direct insights into the elastic and seismic properties of perovskite at very high pressures and temperatures.

In addition, he is an excellent lecturer and a very enthusiastic and generous collaborator. He has been invited by various universities worldwide to present talks, has organized and chaired numerous symposia, is currently an Associate Editor of the American Mineralogist and a founding member and current vice-chairman of the special interests group „Mineralogical Crystallography” of the European Crystallographic Association. For the relevance and international dimension of his work, Artem R. Oganov is a particularly merited recipient of the EMU Excellence Research Medal for 2007.