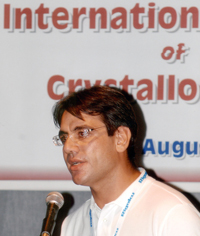 Luca Bindi was born in 1971 in Prato, Italy. He studied at the Department of Earth Sciences of the University of Florence (1991-1996) and obtained the PhD in Mineralogy and Petrology at the same University (1998-2000). His research activity has been carried on with a post-doctoral research position (2000-2004) and subsequently as temporary researcher in Mineralogy (2004-2006). During this period he also had an active scientific collaboration with the scientists of the Division of Mineralogy of the Natural History Museum of Florence.

His activity has been mainly devoted to the structural complexity in mineral structures (i.e., incommensurate structures, superstructures, twinned structures), integrating together mineralogy and the most advanced fields of crystallography. His research covers also topics on the description and characterization of new minerals and on the physical and chemical conditions of minerals in the rocks of the mantle (his pioneering studies on K-rich clinopyroxenes had wide international resonance). His work on the characterization of metallic minerals in ore deposits is especially noteworthy among economic geologists.

To specifically quote only a few of his more significant contributions, he has demonstrated that large amounts of potassium (up to 5.0 wt. % of K2O) can enter the structure of natural and synthetic clinopyroxenes and has presented and discussed all the implications for the mineralogy of the Earth’s deep mantle; he carried out the first five-dimensional crystal structure refinement of a natural material (natural melilite) displaying a two-dimensional incommensurate structure; he demonstrated that some natural silver-sulfosalts (in the pearceite-polybasite group of minerals) are fast ionic conductors and as such may find important technological applications.

The most impressive features of the activity of Luca Bindi are the breadth of his research and his extraordinary productivity. At thirty-five years of age, Luca Bindi has published his scientific results in more than 60 papers in internationally renowned journals.

The excellence of his research has already been nationally recognized, having already been awarded in 2001 with the Award of the Italian Society of Mineralogy and Petrology (SIMP) for the best PhD thesis in the mineralogical and petrologic field, and in 2004 with the Panichi Award of SIMP assigned to young scientists whose research is considered to be outstanding in mineralogical field.

Luca Bindi is a productive and talented scientist who has made major advances on various mineralogical problems, has demonstrated an extraordinary scientific insight and has accomplished an amazing amount of original work in a wide variety of areas, from fieldwork to accurate definition of incommensurate structures. Undoubtedly he will continue to give original contributions in the various fields he has investigated.

For the relevance and international dimension of his work Luca Bindi is a merited recipient of the EMU Excellence Research Medal for 2006. 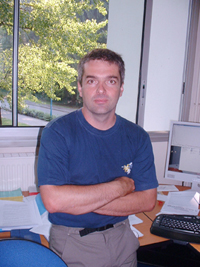 Bruno Lanson was born in 1965 in Châtellerault, France. After a Civil Engineer degree from the Ecole Supérieure d’Ingénieurs in Poitiers (1987), he obtained a PhD in Geology (1990) in Paris, under the supervision of Bruce Velde. He carried out his post-doctoral research activity at the USGS (Denver, 1990-92) and subsequently at the Mineral Geochemistry Laboratory of Elf-Aquitaine Production Co (Pau, 1992-94). Researcher at the CNRS (Centre National de la Recherche Scientifique) since 1995, he is presently head of the Environmental Geochemistry Group at the LGIT (Geophysics and Tectonophysics Laboratory, Joseph Fourier University, Grenoble, France).

The work of Bruno Lanson is devoted to the structure of finely divided minerals, i.e., the phyllosilicates and phyllomanganates (clays minerals, lamellar oxides) and their physical properties, particularly their surface reactivity. He contributed to make this field of research a key discipline in the Earth’s surface studies, as it applies to a large range of environmental aspects.

Bruno Lanson’s early achievement was a coherent, simple decomposition method of the complex X-ray diffraction spectra obtained from the clay mineral mixtures found in sedimentary rocks. This work resulted in a user-friendly computer program which, even after a decade of concurrent development, remains one of the most robust. Since then Lanson explores and characterizes the relationship between the structure and macroscopic properties of clays and phyllomanganates by new advanced microscopic techniques (TEM-SAED…), diffraction and spectroscopic techniques (XANES, EXAFS…) coupled with synchrotron X-ray sources. He masters these techniques and applies them to important problems in crystal- and environmental chemistry, such as the role of structural defects of minerals in their surface reactivity properties.

The questions of minor and toxic element capture and release by manganese minerals are of prime importance in sites of industrial pollution. They are addressed by Lanson through the identification, structural and chemical, of oxide nanocrystals produced by bacteria or found on and within root hairs of plants grown under controlled conditions. At the same time, Lanson has been active in solving the problems of clay-mineral evolution under conditions of changing temperature and chemistry. He linked the quantitative description of complex parageneses to the kinetic processes of clay transformation occurring in natural (sediments) or perturbed (storages) conditions.

Some of those highly original works were completed with students who have been already nationally and internationally recognized, and through international collaborations, abroad (e.g. in Princeton) and spanning Europe from Karlsruhe to Moscow.

Bruno Lanson is a very talented scientist, who has achieved international recognition as one of the leading workers in his field. He undoubtedly will continue to make major advances in the physico-chemical characterization of lamellar nano-minerals and in the understanding of their interaction with the living world in the Earth’s surface complex systems. For the international value and relevance of his work to the questionings in environmental sciences, Bruno Lanson fully deserves the EMU Excellence Research Medal for 2006.