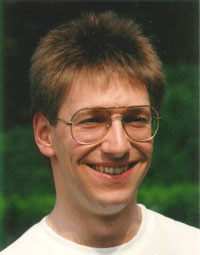 Eugen Libowitzky was born in 1962 in Vienna, Austria. In 1980 he started to study Earth Sciences at the University of Vienna. He obtained his first degree (“Magister”) in 1986. Three years later he finished his Doctoral Thesis, both in Mineralogy and Crystallography. Since 1986 he worked as University Assistant at the ‘Institut für Mineralogie und Kristallographie’, University of Vienna. His first papers focused on field mineralogy, ore microscopy, and surface effects in ore minerals; remarkable are his studies on the optical anisotropy of cubic minerals caused by polishing effects.

In 1994 he moved to Switzerland where he worked with Prof. Dr. T. Armbruster at the “Laboratorium für mineralogische und chemische Kristallographie”, University of Bern. In 1995 he continued his studies with Prof. Dr. G.R. Rossman at the “Division for Geological and Planetary Sciences”, California Institute of Technology. These stays abroad, supported by the Swiss National Science Foundation and by a “Erwin-Schroedinger” fellowship of the Austrian Science Foundation (FWF), enlarged his interest in optics and were the incentive to start investigations of transparent minerals by IR, FTIR and Raman spectroscopy. In combination with X-ray studies he examined disorder phenomena of protons in hydrated minerals as well as OH groups in nominal hydrogen-free minerals.

Back to Vienna, ongoing work on these topics resulted in a large number of papers published in international mineralogical journals. In 1997 he obtained the “venia docendi” for Mineralogy and Crystallography at the University of Vienna and he became Assistant Professor there.

Eugen Libowitzky is an enthusiastic researcher and generous collaborator, and as such he has maintained a wide number of world-wide collaborations, although the majority is Europe based. In this context it is to be mentioned that he is Associate Editor for the European Journal of Mineralogy since 1998. Most of his recent scientific publications deal with the investigation of physical and chemical properties of minerals and inorganic compounds including structural characterization and phase transition. Despite his early work on opaque minerals, the substances he investigated cover a great variety of composition as he includes silicates, oxides, sulphates, or carbonates into his research. Besides the characterisation of distinct compounds his interest deals also with more general interpretations and significances of optical spectra. He has published more than 40 papers in international journals and approximately the same amount of citable abstracts from contributions to national and international meetings. In addition, he is co-author of a hand-book article. Besides his scientific researches he is involved in teaching mineralogy in a broad sense, including analytical techniques based on the interaction between electromagnetic radiation and crystallized materials. He will also be involved into the organisation of the EMU School on ‘spectroscopic methods in mineralogy’ in 2004.

In conclusion, Eugen Libowitzky, for the breadth and relevance of his scientific work and the European dimension of his contribution to mineralogy, is a worthy recipient of the EMU Excellence Research Medal for 2003.