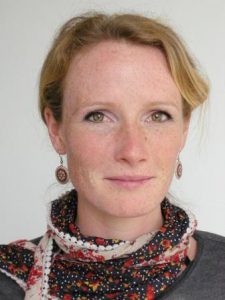 Dr Marquardt’s achievements in her young career stand out in originality and breadth, as well as depth. You can read about her work and her perception of science in the blog of the European Association of Geochemistry.

She is best known for her pioneering contributions to elucidation of the role of grain boundaries  with respect to the physical and transport properties of rocks. She has defined a scientific niche for herself and has already made contributions that have opened up new horizons. In tackling this subject, she became an expert in the use of different methods of Transmission Electron Microscopy (TEM) on samples carefully produced using a focused ion beam (FIB) machine. However, one of her strengths lies in the fact that she does not restrict herself to that tool, and instead branched out to learn new tools such as Electron Back Scatter Diffraction (EBSD). Her interactions with the EBSD community in turn allowed her to incorporate novel techniques recently developed for Materials Science problems to her geological applications. This gives testament to her ability to improve her own work by moving freely between fields.

Dr Marquardt has honed and expanded her analytical and scientific skill set through a range of challenging and forefront projects outside her own scientific niche, where she has made significant contributions. Her work is firmly embedded in the European and International research community, where has become an extremely sought after and dynamic collaborator, e.g. on characterising and understanding diamond inclusions (and thus genesis) or on the redistribution of lead within zircon minerals used for U-Pb dating.

For her seminal contributions to the microstructural investigaton of minerals and rocks, as well as for her far-reaching interdisciplinary and international collaborative research, Dr Katharina Marquardt is a highly deserving recipient of the 2018 Research Excellence Award of the European Mineralogical Union.